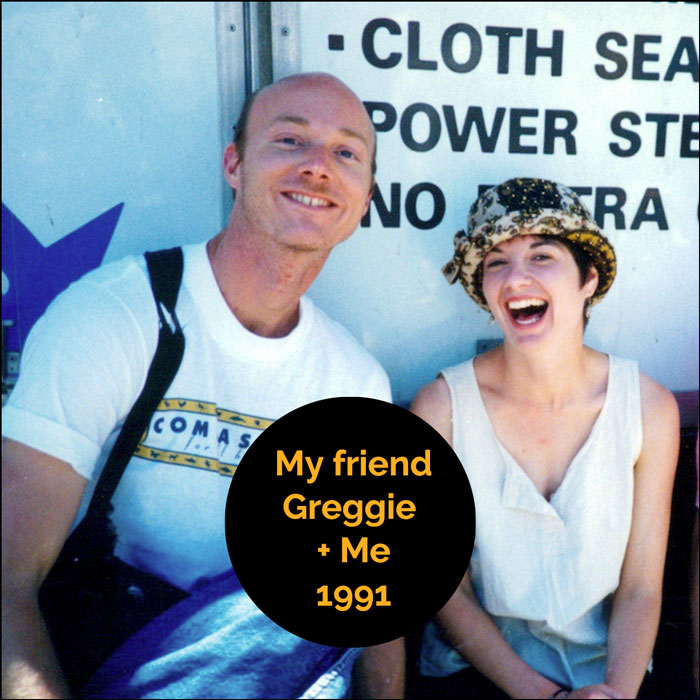 Today’s LoveGram was inspired by a random post I saw on Twitter earlier this week. Someone posted a video from R.E.M. back when their album, “Out of Time” launched in 1991.

The video was from a song called “Shiny Happy People,” which has great significance to me because my dear friend Greggie and I used to listen to it all the time.

So, the other day I clicked on the video and within the first couple notes, I was in tears. It instantly connected me to my friend and to all the memories of those times.

I then shared the video on Facebook because it is really fun — if you click on it —link up above—you will see the dancing and I bet it will make you smile.

Well, I started typing a little backstory on Facebook, and before I knew it, so much came pouring out!

I want to share it with you because it illustrates what I am talking about in today’s Audio LoveGram!

Here you go. I hope it connects with something in you:

I saw on Twitter that today marks the anniversary of the debut of R.E.M.’s landmark “Out of Time” LP in 1991.

That was a dark, dark year for me. It was also a terrible time for my dear friend Greggie. We used to call each other multiple times throughout the days to get help when we’d fallen into “the pit” and were lost in depression.

The two of us would often play this song, “Shiny Happy People” as a kind of beacon for ourselves. I think, looking back, that it was a way of trying to manifest a JOY that we both really wanted, but didn’t know how to access.

Also, looking back, I see that our friendship WAS joy. Even though we connected as new friends because we were both struggling, we would create many moments of laughter in the midst of that.

We had a Saturday ritual of looking up all the garage sales in the paper, mapping out a route, and spending hours looking for treasures. We’d jokingly elbow one another out of the way if we saw anything Pee Wee Herman or weird tchotchkes from the 1960s. We would also always stop for big fat cinnamon rolls from a bakery in Diamond Heights.

We’d sit outside to eat those “cinny rolls” as Greg called them, and we would pour our sad hearts out to one another. We’d share all that confusion and depression and fear and loneliness.

Often, we would BLAST this R.E.M. song loud as we could, drive down the freeway, and SCREAM. It was our shared therapy.

That was a hard, hard time, but Greggie and I often look back on those days as so precious. We speak about wishing we could go back and relive one of them together.

We were deeply troubled, depressed, and anxious. But that wasn’t all there was. It was that period of time that led me to meditation and my spiritual foundation.

It was THAT period of time, when it felt like an iron wall closing in around me, that I realized a tiny pinprick of light in that wall — laughing with Greggie about the Pee Wee Herman pillowcases we both wanted, for instance or watching “The Simpsons” with a slice of pizza from Cybelle’s on 24th Street— could change everything in that moment.

And that led to the rest of my life, in which I STILL practice seeking and creating tiny moments of joy and celebration.

Right before I posted this, I sent this same video link to my friend Greggie and told him to be sure and get out the tissues before he watched it.

But writing to you has reminded me that what I really want to do, aside from simply reminding him of that shared memory, is to express to him again how his friendship saved me in so many ways. How his presence and his humor were the beacons of light that helped me keep going.

I want to remind us all that we can not only send our oldest, dearest friends things that will spark the connection again, but we can always also add RE-APPRECIATION for gifts we received decades ago. Gifts that helped us get to where we are now.

A few years back, I found those Pee Wee Herman pillowcases that I must have somehow won the right to buy instead of Greggie. I mailed them to him with a thank you card. I don’t have anything like that to send today, but I will print out what I just wrote here, and include a couple photos from 1991 of the two of us, and mail it to Greggie with huge appreciation.

Maybe this song sparks a memory for YOU with one of your friends from 30 years ago? If so, send them a card in the mail! Include this link! Thank them for something.

It is super connecting to give ourselves the time and space to reflect + connect! I hope you will gift yourself and someone else with that today.

Thanks for listening. I had no idea this was all going to pour out when I copied the link to this song and thought, “I’ll post that song to make people smile.” Instead, you gave me this BIG unexpected gift!

Seek celebration — even in dark corners,