A “dah who dor-aze” kinda holiday 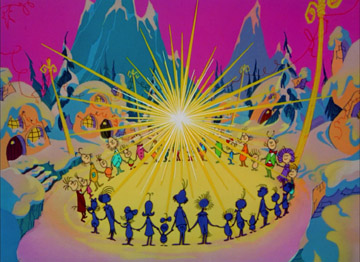 A “Dah Who Dor-aze” Kinda Holiday
By Sherry Richert Belul

At the risk of falling into ranks with the likes of those fluorescent-lit stores who are already stocking the shelves with twinkly Christmas lights and inflatable Santas, I want to talk about the upcoming holiday season. I know it seems so early, but by the time our next newsletter comes out, it will be the end of November and lots of seasonal insanity will already be in full force.

I want to nip something in the bud. No, no. That’s not it. It’s not cutting, I want. It’s creating. I want to invite you to join me in creating a low-stress, high-rapport holiday. A Whovillesque kinda holiday. Just to clarify, I mean Whoville when they didn’t have all the stuff—they just had each other—and they were still singing their “dah who dor-azes” with such gusto. (Note: if you have no idea what Whoville is, please stop reading, go to Netflix or your local DVD store, and order the 1965 animated cartoon, How the Grinch Stole Christmas. Have a box of tissues handy and watch away. )

I’m not saying let’s not have ribbons, tags, packages, boxes, or bags. I don’t wanna close up your Christmas tree or Hanukkah bush like an umbrella and hoist it away in a classic Grinch-like manner. But I do want to start a conversation, now while there is still plenty of time, about what the holidays really mean to us. About how to make them spirited in that old-fashioned sense of people sitting around a fire together, telling stories or playing musical instruments together.

That sounds cliché, doesn’t it? Which is kind of funny, because cliché means commonplace. And it’s my experience that hanging out with people without gadgets or gizmos is not at all commonplace anymore. It’s my experience that there’s often not enough time to relax with people I love because myself and all the people I love are so busy running around like crazy trying to prepare fancy foods and buy gifts for all the people we love.

Maybe this is just my own experience, and if so, let me know. But it feels like something’s gotten lost. And what that something seems to be is wide-open spaces in which we can be with the people we love, without looking at the clock. Without opening the laptops. Without checking our smart phones for emails or calls or games or alarms. I want to campaign for small periods of time in which we return to the idea of simple, non-electronic, cyberless pleasures.  And I wanna do it now, during the season when our particular culture is most likely to find itself in a frenzy of rushing and running and trying and buying. A season of oh-so-too-muchness.

My friend and colleague, Pam Sterling, uses a phrase she calls “a bigger smaller life.” I love this! What she’s saying (and living!) is a way of downsizing the stuff that weighs us down and clutters our minds and upsizing what makes us feel truly energized and alive. Downsize clutter, upsize connection.

Could we have a “bigger smaller holiday season”? What would it be like if our gifts to one another this winter were less about plastics and leathers and precious gems and more about shared experiences and long, cozy afternoons together? It’s terribly trite to say, but I’m gonna say it anyway: what if the holiday season were about presence … not presents? How would we feel? Who would we be? Do we have the courage to try?

He puzzled and puzzled till his puzzler was sore. Then the Grinch thought of something he hadn’t before! Maybe Christmas, he thought, doesn’t come from a store. Maybe Christmas… perhaps… means a little bit more!

It’s still early enough to change the song of the season. Could we “join hearts and hands” for a rousing round of “Dah Who Dor-aze?”

(Note: Image and inspiring words copyright Theodor Geisel and Chuck Jones for the 1965 animated film, How the Grinch Stole Christmas)