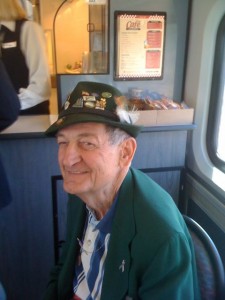 Tomorrow morning I’m hopping on Amtrak to spend a day with my business partner, Tricia, who lives in Grass Valley. I’m reminded of the last time I took the train to see her, when I had a very extraordinary experience: I met someone.

When you think about it, meeting someone new is absolutely one of the most extraordinary experiences we can have in life. There are nearly seven billion people on earth. How many of them do we ever have the chance to meet? And when we do, how often do we really take the time to look ‘em in the eye and to sit down and hear their stories?

Really, when we take the time to meet someone, isn’t it always like a little rush of electricity? A jolt of vitality and energy? Well, it is for me.

Last time I took Amtrak, I headed straight for the Cafe Car to buy some instant oatmeal and a cup of joe. Sitting next to the counter was an elderly man in a jaunty green hat. His hat was covered in interesting looking buttons. Being a hat gal myself, I commented, “Great hat!” And then, because I was not running to catch a bus or rushing to pick my son up from school, or late for a meeting, I paused next to the man and said, “Tell me about those cool looking pins.”

After we talked for a while, I got up to leave. I said, “Wow, I’m glad you wore that hat because it prompted me to talk to you.” He grinned and said, “I know. This hat is a chick magnet.”