Creating Your World from Scratch. 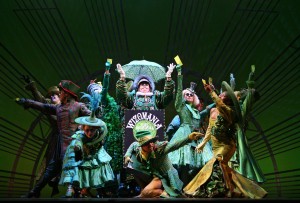 Last week I attended an event called, Behind the Emerald Curtain, which is a behind-the scenes look at the making of the musical, Wicked. Whether or not you are a fan of Broadway musicals in general or Wicked in particular, what I want to say is how Wicked has inspired me in a surprising way.

The writer, producer, director, costume director and many others teamed up to create an entire world out of their imagination. They had a vision for what they thought the clothes would be like, how the music would sound, what the lighting would be like, what the town would look like, how every single detail of that imaginary world would feel. They had a vision … and they simply worked together to bring that vision to life.

When I was in the audience watching the show, I truly felt as if I had stepped into a magical world. It worked. The world of Oz exists.

And of course, Wicked is not alone in this phenonema. Nearly every single theatrical production has done the same thing. What struck me so strongly — as if seeing this for the first time — is the realization that our lives are no different. Most everyone of us has a vision for how we would like our lives to feel. We have a sense of what the “scenes” would be, what the costumes would be, how the setting would like, what the characters might say.

What if we enlisted our own teams of “colleagues” (lovers, friends, family) to help us bring that vision to life so that we could live out the rest of our lives in a play — or musical, if you wish!— that feels exactly like we have always imagined?

Does that feel impossible? What if this week we each committed to just one detail of the world we’d like to live within? I can imagine going to iTunesand purchasing Michael Franti’s Say Hey (I Love You) so I could listen to it and dance around in the mornings. I can imagine going to Thrift Town and buying some crazy-fun orange or asymmetrical piece of clothing that the “real” me longs to wear. I can imagine lighting every candle I have and basking in the glow. I can imagine putting on Monster Mash, grabbing some crazy hats, and parading around the house with my son. I can imagine inviting friends over to dinner and requesting gowns and tuxedos from any era they wish.

What if, piece by piece, I consciously created the world I most want to live in. Sound crazy? Heck, if Wicked can do it, why can’t I?

What detail would you begin with …?