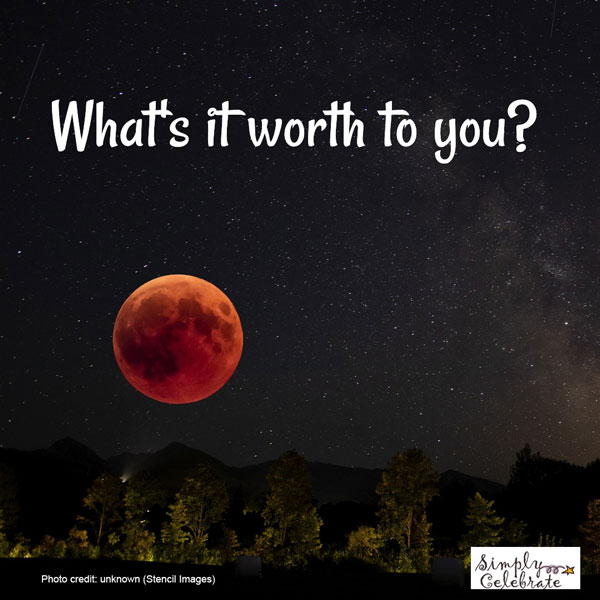 I had plans to be with my beau during that time and we both knew this celestial moon event was happening.

We’d researched when it was happening. And the best times to see it in the Bay Area.

We were so excited. We were IN!

This was gonna be FUN!

It started raining in the afternoon.

We got some groceries and holed away in his apartment, teaching ourselves how to waltz — so we could be prepared for next week’s Edwardian Ball.

And as the clocked ticked ever closer to the time we needed to bundle up and go chase that crazy moon, we started to waver. One or the other of us would peek outside. And even though it has stopped raining, the skies remained so cloudy.

“Maybe we wouldn’t be able to see it anyway.”

“We could just stay in and watch it on the internet.”

Have you ever done this? You’re excited about something and you’ve been looking forward to it. But then the time comes and you can’t imagine driving there or getting dressed or packing what you need? It seems easier to simply stay home?

We’d read online that it was best to get outside at 8:41pm. After all our wobbliness, at 8:44pm, I jumped up and said, “Let’s go! Even if we can’t see anything, it’ll be refreshing to be outside and at least we’ll have tried.” Ian jumped up and put on his coat and shoes. We were out the door in two minutes time!

The skies were cloudy. We couldn’t see anything — no stars and definitely no red moon.

But we kept walking and climbed up a hill to see if there might be a shift in the clouds and if we could see better away from so many street lights.

We craned our heads, searching the skies.

Ian said, “Well, we know it is out there somewhere. We’re still experiencing the eclipse. Just not quite the way we thought.”

We laughed. And hugged. And were just about to turn and head back to his place, when the skies opened up! Or, rather, the clouds opened up! There she was! We had an amazing view of the eclipsed moon, all red and looking extraordinary!

The cloud cover came and went, came and went. We got to see the glow of the moon return, starting with just a small sliver. It was such a magical feeling to be experiencing something that we knew people all over the world had been and would be experiencing.

We talked about how people for centuries have looked at the moon and have experienced eclipses. We’d read earlier about the stories people created in the olden days about what it meant. (Mostly that some kind of animal or god was eating the moon!)

Did cave men look up? What did they think?

Our world suddenly felt waaaaay bigger than it had just an hour previously.

We were both energized and excited. Life felt fresh.

Do you know what I’m talking about? Have you had that experience of actually getting yourself up and at ’em … and even though you had to kinda trudge through the resistance, when you got to where you were headed, it lit you up?

So, isn’t it funny that even though we know this about ourselves, that the next time we STILL may have to face that wavering, wobbly, not-sure, maybe-I’ll-just-stay-home feeling?

I’m writing this as a reminder to myself — and hopefully for you, too— that our lives are worth the effort!

We have to remind ourselves to simply get over that little slump of a hump. We must jump the slump!

Next time you’ve got plans for something fun or interesting and you’re battling ole Squawky Polly mind, just think of the red moon and ask yourself “What’s it worth to me to stay planted here on the couch? Is it worth all the energy and celebration and connection I might be feeling if I stick to my plans?”

Then, simply get up and go!

That extra effort is worth it. YOU are worth it!!!