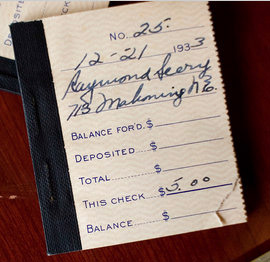 At lunch just now, I happened across a very uplifting story. (Shocking, I know!)  The New York Times article, Kindness of a Stranger that Still Resonates, is about a man who sent money to strangers during the depression. Folks wrote letters in response to an advertisement that B. Virdot (a pseudonym) ran in a Canton, Ohio paper. In their letters they told him their reasons for needing money and how they would spend it.

All these years later, the letters were found and relatives of the letter-writers were invited to share their stories at a “reunion” event.

Olive Hillman used the $5 check to buy her 8-year-old daughter a doll with a porcelain face and leather arms. “I was thrilled to get it,” said the daughter, Geraldine Hillman Fry, now 85. “It really was the only doll that I ever had in my life, so it meant a lot to me.”

Imagine sending money to a woman so she could buy her daughter the only doll that kid ever had? Wow.

This article makes me think of the ripple effects when we donate money or hide money for people to find. We really just never know what it means to someone. It makes me want to give.