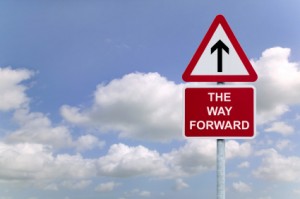 This morning when I was driving my son to school, I was on a busy major street and someone was double-parked, causing me to have to stop and try to merge into the left lane. I had my turn signal on to indicate that I needed to move over, but car after car after car sped by, not allowing me to merge into their lane. I found myself silently cursing each one as they went by: “Stupid driver. Mean driver. Get off your phone. Let me in. Grrrr.”

Then, someone in the other lane slowed down, flashed their lights at me, and let me in. I waved a hearty wave in thanks. Even fluttered a second happy gesture because I was so grateful to that generous soul.

And then I went back into my head— once again silently cursing all those mean people who wouldn’t let me in. Thinking about how rude they were. How thoughtless.

After just a couple minutes it hit me: I was completely focused on feeling bad.  All of my energy and thoughts were being led down the path of “feeling separate and righteous.” So I quickly reminded myself of that wonderful person who waved me in to the line of traffic. I thought about how she deliberately slowed down and even flashed the lights as an extra measure of niceness. I thought about how good it felt that someone took the time to be kind to a stranger. I started sending that person good energy in return, imagining her receiving a phone call from a friend or getting a compliment at work.

I felt sunny again. Like the world was actually not plotting against me, but was completely on my side.

And voila. I saw it. The simplicity and joy of a practice of gratitude. It doesn’t always happen naturally. Sometimes it takes great work to yank Monkey Mind away from whatever bone of discontent it is gnawing on. To turn my attention to what is going right, rather than what went wrong. But man, is it worth it.

I wanna wave myself into that lane whenever I can!